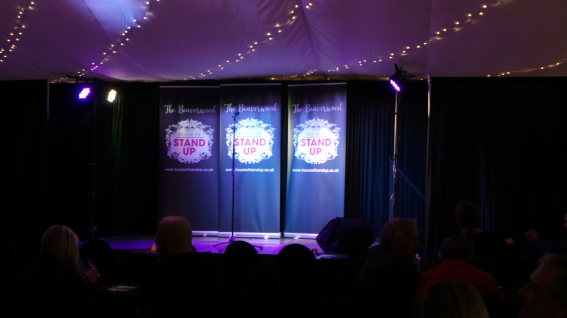 At the age of 15, Christian Reilly joined a band to get laid.

The Salvation Army had different ideas…

As former integral part of the Perrier award-winning show Otis Lee Crenshaw and the Black Liars, with comic/songster Rich Hall, Christian's career has taken him around the world three times. On his way, he received accolades at international festivals and numerous network TV credits in the USA, Australia, New Zealand and Britain.

Now a solo stand-up performer and playing all the major comedy venues in his own right, Christian uses his dynamic guitar and vocal skills to target histrionic rock bands, musical theatre and morose indie musicians. He recently wrote and performed for 'That Was Then This Is Now' (BBC Radio 2) as musical counterpart to Richard Herring and Emma Kennedy, as well as giving his improvisation skills an outing on Radio 2's 'Jammin'.

'"If you’re a fan of Bill Bailey or Rich Hall,

"This genuine, trendy, confident comedian has a natural talent

for risky jokes, song and quips which you can’t help laughing at!

If you get the chance to see Reilly live, do so. He is not to be missed!"

Simon is one of the UK’s most respected and established comedians. He is a regular on TV and radio and particularly popular on the corporate and after dinner circuit. His TV credits include BBC One’s Live at the Apollo and Michael McIntyre’s Comedy Roadshow, BBC Two’s Mock the Week and was a regular on Channel 4’s Stand Up for the Week.

Simon’s BBC Radio 4 series Simon Evans Goes to Market has audiences delighting in his witty and insightful take on the unpromising comic territory of commodities, trading and wealth. Other BBC Radio 4 appearances include the The News Quiz, The Unbelievable Truth and Armando Iannucci’s Charm Offensive.

Simon is the only comedian to have appeared on both University Challenge: The Professionals, and Celebrity Mastermind (which he won – specialist subject Sir Ernest Shackleton). Simon has also recently appeared on This Week and Question Time.

His live tour shows such as Leashed and Genius have sold out theatres around the country and garnered superlative reviews from national and comedy press. Dominic Maxwell described him as ‘demonically dry’, William Cook as ‘sublime’, and Chortle as ‘an evil delight’. 2020 will see Simon is embark on a 70 date UK Tour of his most personal show to date, The Work of the Devil.